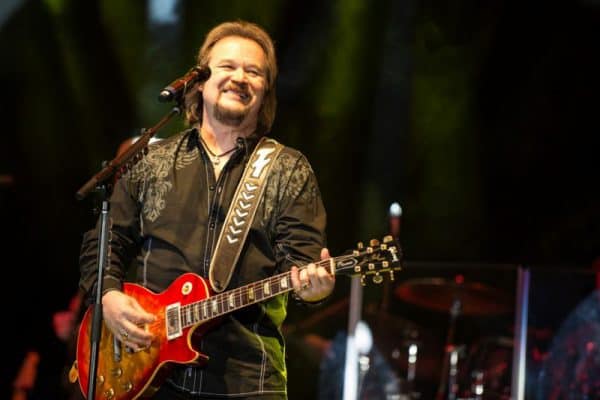 SUMMERSIDE, P.E.I.  – What a buzz it was in Credit Union Place in Summerside last Saturday night when the roar of 2,200 fans filled the sold-out arena as two-time Grammy Award winner Travis Tritt and his six-piece backing band took the stage.
The performance got underway at 8 p.m., with no opening act, as Tritt played straight through until 9:50 p.m. “We’re gonna be doing songs tonight that’ve been around for a while,” said Tritt, as the crowd responded with loud cheers. “We came here to party with y’all,” he added. And party it up with the big career hits he did.
The Grammy Award-winning tune, “The Whiskey Ain’t Workin’ ”, the 1994 hit “Ten Feet Tall” and “Bulletproof”, “Southbound Train” and “Outlaws Like Us”, to name a few, were some of the big numbers that highlighted the first half of the show. Getting into it with boogie-woogie dance moves and lots of head-throwing-back laughs, the pumped-up 54 year-old even spun around in a jumping circle with his acoustic guitar during the entire bridge solo for their kicking cover of The Eagles’ “Take it Easy”. “Any love song fans here tonight?” Tritt asked, as he took a seat at centrestage on a leather chair for the solo-acoustic portion of the night, which lasted for a few songs. Tritt then serenaded the crowd with “Love of a Woman”, as the blue glows of cell phone video screens lit up the rows of seats like fireflies. And when he went into the picked-out arpeggiated notes on his acoustic for his 1991 hit, “Anymore”, as his voice rang out particularly powerfully in this song, the crowd sang along for the refrains and even gave him a standing ovation at its end.

Tritt’s backing band is a slick, highly-experienced pro country ensemble, complete with keyboards, lead electric guitar, drums, bass/backing vocals, pedal steel guitar and fiddle – and it was a joy to take in their tremendous musical work throughout the show – as Tritt himself took a good amount of time that night to introduce and thank his band, whom he evidently cares a great deal about. And the band especially shone in the second half in fired-up tunes like “Country Club” and “It’s a Great Day to Be Alive”. Coming ‘round near the end of the night, some crowd members were allowed up near the stage (whereas security had held them back prior to that), and soon enough, a large crew of people gathered around Tritt as he sang at the front of the stage.
Shaking hands, fist bumping, and signing T-Shirts and hats, Tritt still didn’t miss a beat with his singing, as he ended the night with his 1991 hit, “Homesick (It’s All About to Change)”. “You’ve been a wonderful audience tonight, God bless you for coming,” Tritt shouted out to Credit Union Place, which roared back in cheers of appreciation as Tritt and his band exited the stage.
Full Article by Todd MacClean at: theguardian.pe.ca