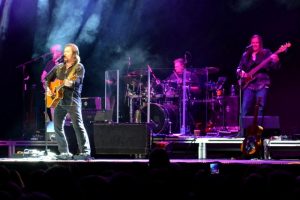 Lifelong fans decked in checkered shirts, cowboy hats and boots waited to see two-time Grammy winner Travis Tritt kickoff country at the Credit Union Place Saturday evening.
A growing line of excited fans stretched from the lobby to the parking lot outside. Among those patiently waiting were Tammy Curtis and Brenda Ellsworth from Summerside.
“I am too excited and he has to sign my Alan Jackson hat,” said Curtis, who came with her best friend Ellsworth. “And Help Me Hold On is my favourite song because it just relates to life itself.” ‘Help Me Hold On’ is a ballad of a failing relationship and is the first number-one hit in the United States and Canada by the Georgia native. His music influences include southern rock, blues and gospel to create songs that have stamped him on the list with some of country’s biggest stars. “We have approximately 2,200 people in tonight,” said the event co-ordinator Robbie Rankin. “We would like to call it a sold-out show so it’s a successful night altogether and it certainly helps put the city on the map.”
Rankin continued, “This is a chance for many people to see a star that they grew up watching on television and people from P.E.I. don’t get the opportunity to see the big names all the time like they do in the bigger cities so if we can bring them here then we love to do that.
Tanya Eldershaw, from Souris, who came dressed in a checkered shirt and hat says Tritt stands the test of time. “I am very excited to be here and I saw Travis Tritt eight years ago in Moncton and he puts on the best concert I’ve ever seen and I’m expecting this to be even bigger and better,” she said. “I love all his songs but ‘Here’s a Quarter’ is my favourite because it was more like a drinking song back in the day.”
This year the Credit Union Place, that’s hosted a wealth of talent, celebrates its 10 th anniversary. “We’ve had lots of big names over the years,” said Rankin. “And for Summerside to pull this off it’s quite an accomplishment.”
Check out the full article and photos at: theguardian.pe.ca